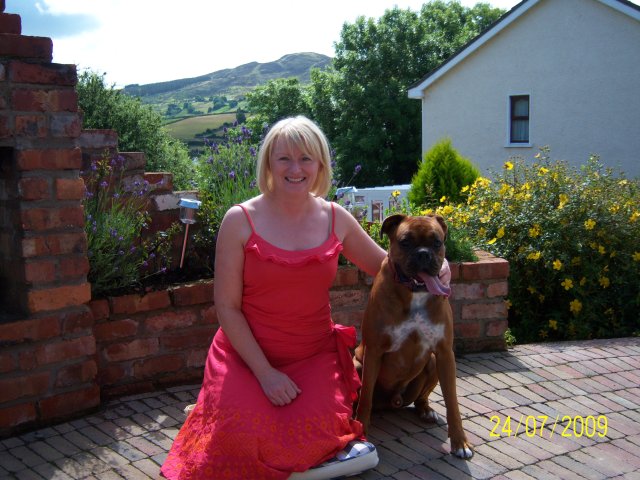 When Buster arrived here as a tiny puppy we had no idea the journey that lay ahead. He quickly developed into the equivalent of a very demanding toddler and at this point I’d say he’s like a very boisterous and demanding teenager. Before we found Joanne, I really didn’t know what to do next. Buster knew no boundaries, I mean he knew all the commands (I had after all spent a fortune with several trainers) and sometimes he even obeyed them, when he felt like it! He could walk to heel in the sense that he understood what he was supposed to do but again if something caught his eye, he was off and I was running. Then Joanne arrived and everything changed. It was almost annoying how quickly and easily she was able to turn things around.

After working on behaviour in the house, Joanne took him out side and began to walk him. My frustration was almost equal to my relief; there he was, trotting along quietly behind her as though this was how he had always done it. I now have a dog who while still boisterous and full of personality, has finally realised he’s not in charge. I could not recommend Joanne highly enough. She is knowledgable and patient, especially with the owners. She is always happy to answer any queries or give extra help if I need it. Buster adores her and he seems a pretty good judge of character to me.